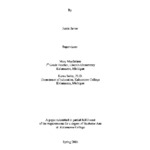 Over 300 languages are spoken in the United States. As of 1990, 31.8 million Americans spoke a language other than English at home, and the country's population included 6.7 million non-English speakers. Nationwide, one-third of the children enrolled in urban schools speak a language other than English at home as their first language. Around 2.6 million schoolchildren throughout the country do not speak English at all. The language rights of ethnic minorities in the United States have been a source of public controversy for close to two decades. To accommodate this dramatic surge in the nation's population of foreign language speakers, language assistance has been mandated on the federal, state, and local levels in the areas ranging from voting and tax collecting to education, social services, and consumers rights. The author surveys the growth of bilingual education programs in the US, focusing on his own student teaching experience in a Two Way Immersion program.