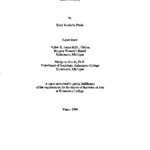 In the summer of 1996, I was blessed with the opportunity to work with a very prestigious Obstetrician Gynecologist at Borgess Hospital, named Dr. Arthur R. James. Supporting my eagerness to fulfill my requirements at Kalamazoo College and my willingness to gain experience in this medical field for which I have interest, Dr. James allowed me to be his "shadow" for the entire summer. He took the responsibility in making sure that I was properly exposed and taught as much as he could in such a small period of time. Through this experience I learned a lot about what it takes to become a good doctor. Dr. James constantly enforced his philosophy about his role in his patients' lives. He told me that "you're not only your patients' doctor, but you're also their advocate." This stuck in my head throughout the entire summer as I watched him put his philosophy to action. By watching him, he became not only a role model for myself, but a model doctor to his patients. His passion for babies drove him to spearhead a project that would attempt to save the lives of many babies in Kalamazoo. This project was called the Fetal and Infant Mortality Review (FIMR). The summer of 1996 marked the biggest events that would place this program into action. That summer was the summer that the Federal Government sent a committee to Kalamazoo, Michigan to review the proposal for this program, because it would cost a lot of money. Various delegates from various parts of the community attended and luckily, I was able to take part in those meetings. Dr. James allowed me to attend these meetings because he wanted me to see what it required in every aspect of being a doctor. The meetings were very productive because it led the Federal Government to believe that this program was absolutely necessary in order for the infant mortality rate to be reduced in Kalamazoo County. The presented proposal was composed of facts about the past infant mortality rates in the U.S, Michigan, and Kalamazoo County. Furthermore it highlighted the huge disparity in the black and white ratio for mortality rates. This opened the eyes of every committee member sent by the government and made them realize how important a program such as FIMR would be in Kalamazoo. One month later, the federal government deemed this program as necessary and approved it for a budget large enough to keep it going for 5 years. This experience inspired me to do my SIP on infant mortality. The significant information gained may possibly be used in assessing prospect individuals who have increased chances of contributing to infant mortality.