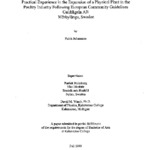 Sweden is a small democratic country approximately the size of California. With only eight million inhabitants people have the luxury of spreading out over the beautiful landscape. Due to the space afforded each individual in Sweden, its inhabitants developed a respect for nature and its ways. These ways expose their presence in every aspect of life, ranging from politics, to business, to morals. From these view points people created standards that they set on dietary products. One example reveals itself with the poultry industry. A major contender in Sweden for poultry is Guldflgeln. Its enterprise resides entirely within the borders of Sweden, from the beginning stages of the hatchery to the final stages of becoming chicken wings and drumsticks. Since all components of Guldiageln reside within Sweden and it is a privately run and owned Swedish corporation, the morals of the society are prevalent. The way in which the morals permeate into the corporation reveal themselves in how the poultry is raised and cared for until fit for human consumption. Claes Garrel has the responsibility of making sure the birds have a healthy upbringing in the most rigorous natural way.