JavaScript is disabled for your browser. Some features of this site may not work without it.
Welles Hall 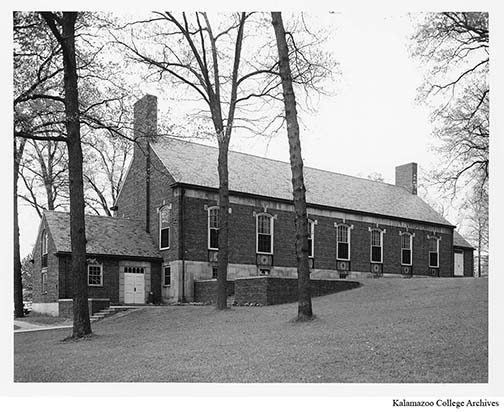 Welles Hall was built in 1940 as a student union and a dining hall, replacing the dining facilities in Trowbridge Hall. It was named after F.R. Welles who funded the building project. According to the March 1941 Kalamazoo College Bulletin, "The main dining room contains tables for three hundred guests, a large fireplace, and a spacious platform for speakers, orchestra or other forms of entertainment. The high vaulted ceiling and the arched windows add to its attractiveness and comfort. It makes possible the holding of large formal banquets and dances on the campus." The mural "The Bridge of Life" was painted at one end of the dining hall from 1940 to 1942 by Philip Evergood. In 1959 two wings were added to Welles Hall which included a snack bar, bookstore, radio station, and rooms for student organizations. When Hicks Center opened in 1970 Welles Hall was no longer used as the main dining facility. Instead it was used for dances and other events such as Monte Carlo. Renovations in 2008 restored Welles Hall as the main dining hall on campus.