JavaScript is disabled for your browser. Some features of this site may not work without it.
Hutments/Married Student Housing 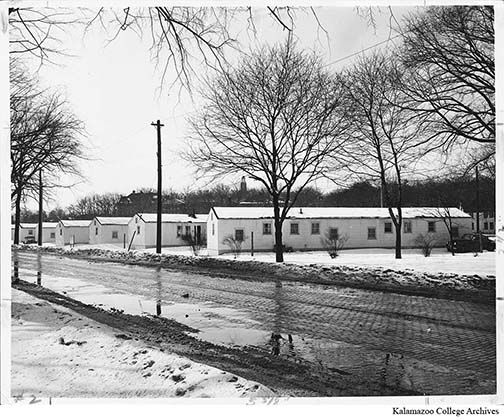 To accommodate veterans attending the College and their families, former Army barracks were given to the College by the government and were moved to the campus area in 1946/8. Some were located near the corner of Academy Street and West Michigan Avenue, while several others were in the 1600 and 1700 blocks of West Michigan Avenue. By 1953 many of these "hutments" as they were known were removed. Students had complained for years about the inadequacy of the "hutments" because of their poor heating, lack of space, and layout. In May of 1961 six new duplex units were installed. These included modern conveniences like individual natural gas furnaces, dinette tables, drapes, and a rent of about $45 a month. The new units were built by the Maywell Company of Elkhart, Indiana.