JavaScript is disabled for your browser. Some features of this site may not work without it.
Stockbridge House 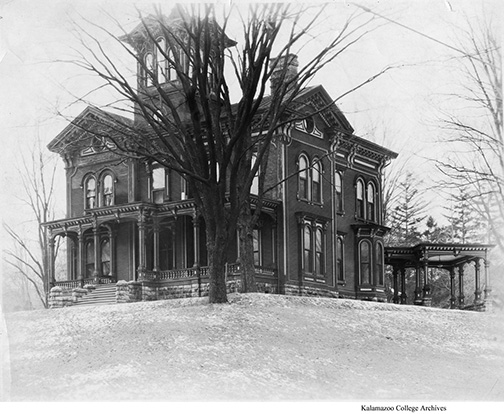 This spacious, elegant Italian Villa-style home was built by local businessman Charles R. Bates and his wife in 1870, and featured elaborate woodwork. The tiles surrounding one of the fireplaces each depicted a scene from a Shakespeare play. Following Bates' death in the late 1870s, the home was purchased by U.S. Senator Francis B. Stockbridge. The home stood on a hill above Carmel (now Acker Lane) and West Main streets. Kalamazoo College acquired the property in 1922 for $45,000. Known as Stockbridge House or Hall then, it was alternately used as living space for men or women (housing about 22 students), depending on the College's housing needs. The barn behind the home was used for staging plays by the College's drama club for several years. It was little used after 1928, and was demolished in 1940, along with the barn and stable. In 1946, Stowe Stadium was built on the location.