JavaScript is disabled for your browser. Some features of this site may not work without it.
Williams Hall (Upper Hall) 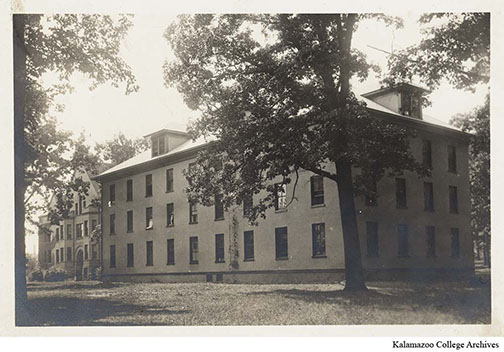 Construction was completed in 1849 on Upper Hall, which was originally meant to house the Theological Seminary. However, the four story structure became a men's dormitory. As originally built, it consisted of 36 study rooms, 36 double bedrooms, a chapel, and six recitation rooms. According to the 1902-03 college catalog, rooms for the three men's literary societies were also located in Upper Hall. It was remodeled in 1911, however, a fire, apparently caused by faulty wiring, broke out in the attic on March 17, 1916. The fourth floor was so badly damaged by fire and water that it had to be torn down. The decision was made to repair the building as a three-story structure, with a new and different roof style. The cupola and bell that once adorned the building were not replaced. In 1924, Upper Hall was renamed Williams Hall after beloved Dean Clarke Benedict Williams, who, along with his wife, died in the 1923 Yokohama earthquake. Hoben Hall was built immediately to the east of Williams. In 1937, as soon as students moved into Hoben, Williams Hall was demolished.