JavaScript is disabled for your browser. Some features of this site may not work without it.
Angell Field 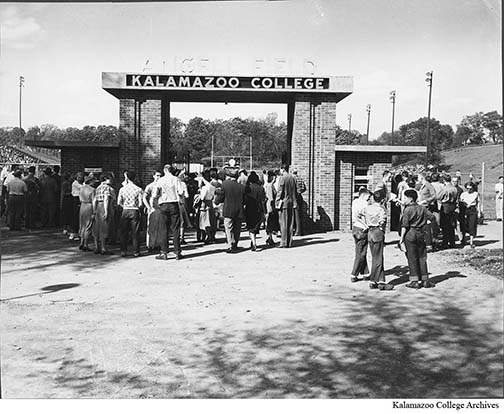 Kalamazoo College purchased the land for Angell Field in January 1944 for $47,500. As part of the deal the old College field was given to the city for use as a park. Ground was broken on the field in September of 1944 and the first game played on Angell Field was on September 27, 1946. An article from The Index from the same date states: “Tonight is a red-letter day in the annals of Kalamazoo College history in that the first game played since 1942 will usher in the season with a clash between Kazoo and Adrian in the new Angell Field.” (K defeated Adrian 20-0.) The field was officially dedicated on October 19, 1946. The football stadium and pressbox, lights for night contests, and a quarter-mile track were provided by Mr. and Mrs. William R. Angell, in memory of their son, Chester M. Angell. Lt. Angell was killed in action over Sardinia in 1944. Prior to the land's purchase, it functioned as the north nine holes of the City of Kalamazoo's Arcadia Brook Golf Course.