JavaScript is disabled for your browser. Some features of this site may not work without it.
Hoben Hall 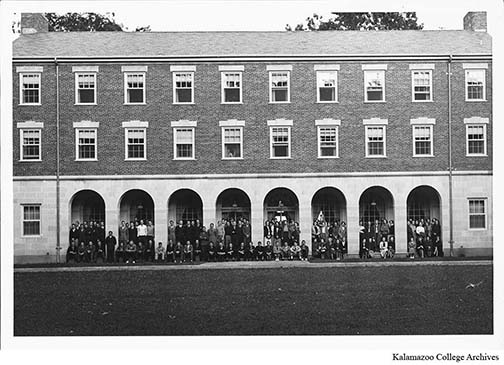 Construction for Hoben Hall began on April 21, 1936. It was designed by architect Aymar Embury II at a cost of around $150,000, funded mostly through the donation of Mr. and Mrs. Enos A. DeWaters (Class of 1899 and 1900, respectively). It was constructed as a men's dormitory to replace Williams Hall, whose bricks were sold to fund the furnishing of Hoben Hall. On January 20, 1937 Hoben Hall was dedicated. It is named after Allan Hoben (Kalamazoo College President 1922-1935). Originally, it was furnished with two game rooms (usable for a fee of 25 cents per semester), a guest room (at a rate of 50 cents per night), a powder room, an infirmary, and a kitchen. Initial capacity was set at 116 students. While the residence hall is now reserved for first-year students Hoben was initially open to all classes.