JavaScript is disabled for your browser. Some features of this site may not work without it.
Tredway Gymnasium 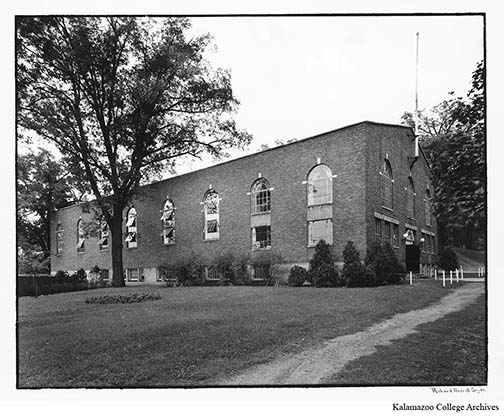 The first gymnasium at Kalamazoo College was built in 1911. It was re-modeled in 1930 and re-named the Tredway Gymnasium in honor of Arthur Clifford Tredway who had left $50,000 to the college upon his death for the remodeling project. A.C. Tredway, born on August 26, 1872 in Detroit, was a member of the college's Class of 1898. The 1930 remodeling was undertaken by architect Aymar Embury II. As a result, the seating capacity increased to 1,000, a basketball court with a 50 x 90 ft playing floor was added, and the showers, lockers, and dressing rooms were improved. In 1960 the gymnasium was renovated and a tennis house was added on to the building. Tredway Gymnasium was demolished in April of 1980 and re-placed by the Anderson Athletic Center.