JavaScript is disabled for your browser. Some features of this site may not work without it.
Bowen Hall 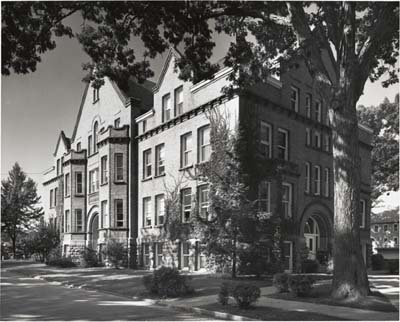 Bowen Hall was opened in 1902 at a time when there were only three other campus buildings -- the men's dormitory, the ladies' residence hall, and Kalamazoo Hall. It was located on the southeast corner of campus between where Hoben Hall and Hicks Center presently stand. Bowen Hall was named after the chairman of the Board of Trustees, Charles Clark Bowen. The first floor contained lecture and recitation rooms, offices for the President and his secretary, a laboratory room, and wardrobe rooms for men and women. On the second floor, classrooms, the library, and faculty offices were located. The upper floor contained a chapel/assembly room, a kitchen, and rooms for the YMCA and YWCA. The basement housed separate bicycle rooms for men and women as well as laboratories and a boiler room. In 1926, the Praeger Greenhouse was built alongside Bowen Hall. It was named in honor of William E. Praeger, Professor of Biology. Renovations were done in 1956-57 to modernize the building. However, in 1968 Bowen Hall was demolished when Mandelle Hall was converted into the new administrative building.