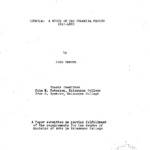 The underlying assumption of this paper is that the first-hand writings of the colonists and the later academic monographs of the anthropologists and ethnographers are in some way complementary; that both are necessary for any accurate history of the colonial experience in Liberia. We have chosen as our focus the so-called "colonial" years of Liberian history, stretching between 1820 and 1837. The organization of the thesis itself is, perhaps, a too simplistic and Hegelian one: thesis, antithesis, and synthesis. The first section attempts to sketch a model of native society as it existed on the "Pepper Coast" prior to the arrival of the American colonists. The second section briefly traces the origins of the colonization movement in the United States in order to understand the development of the colonial "native policy" in Liberia. The final section is a record of the colonial period itself, a study of its impact on indigenous society in Liberia.